Covid-19 & Your Visit to the Clarke Theatre.

The Clarke Theatre continues to respond to the Provincial Health Orders, implementing any necessary changes, communicating to user groups affected and addressing issues with the general public if they arise.
Please note these are often changing impacting many aspects of our operation.
Your patience is appreciated as we work through the Orders.

Vaccination Passes (QR Code) are required for all visitors to the Clarke Theatre who are 12 years old and older and Masks are required upon entry for those 5 years and older.

We ask for everyone’s patience and understanding as we continue to transition.
Here is what is coming to the
​
Clarke Theatre in Mission!
​
Fraser Valley Academy of Dance 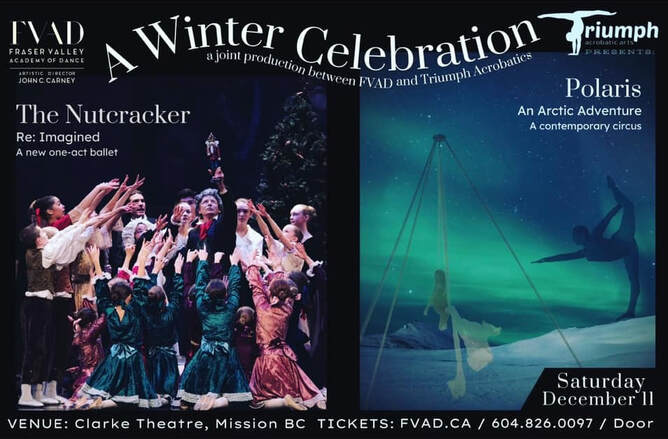 ​Fraser Valley Academy of Dance presents The Nutcracker 2021 “ReImagined”
plus “Polaris” on Saturday, December 11, 2021, at the Clarke Theatre
in a special collaboration with Mission’s Circus School – Triumph Acrobatic Arts.

Contact the FVAD Office for your FVAD Performer ticket – ​for students in our Nutcracker cast who wish to watch the second act.
​O Christmas Tea: A British Comedy 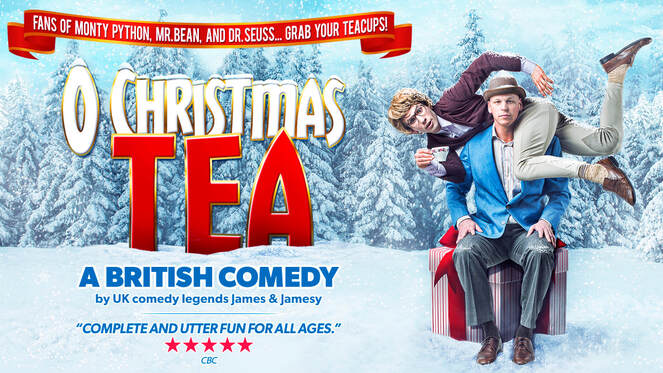 Off-Broadway Comedians and London's 3-time IMPRESARIO Award-Winners, James & Jamesy return with their outrageously funny and brilliantly inventive Christmas comedy classic O Christmas Tea — an astonishing show that delights thousands of hearts every holiday season.
When catastrophe strikes at James and Jamesy’s Christmas tea party, flooding the world with tea, the friends leap into action, finding innovative and hilarious solutions to keep them afloat. Redefining immersive theatre, these masters of physical comedy—with over 20 comedy awards to their name—sweep the audience out to sea in a jolly aquatic escapade brimming with whimsy, action, and ingenuity in a celebration of friendship at Christmas.

“An ode to the idea that anything is possible.”
★★★★★ Torontoist

“I cannot think of a show that will leave you more profoundly happy than this.”
★★★★★ Stage Door Toronto

Hailed as “a child’s imagination on steroids” by London Free Press and “a masterpiece of physical comedy” by Theatre In London, critics rave for the charismatic James & Jamesy. A must-see performance on the international comedy circuit, the unstoppable duo, regarded as “one of the most popular fringe duos ever” (CBC), has been named Best of Fest (Orlando, Toronto, Winnipeg, Ottawa), Most Outstanding Show (London), Best Comedy (Victoria), Patrons’ Pick (London), among many other accolades.

Leaders of the Pack 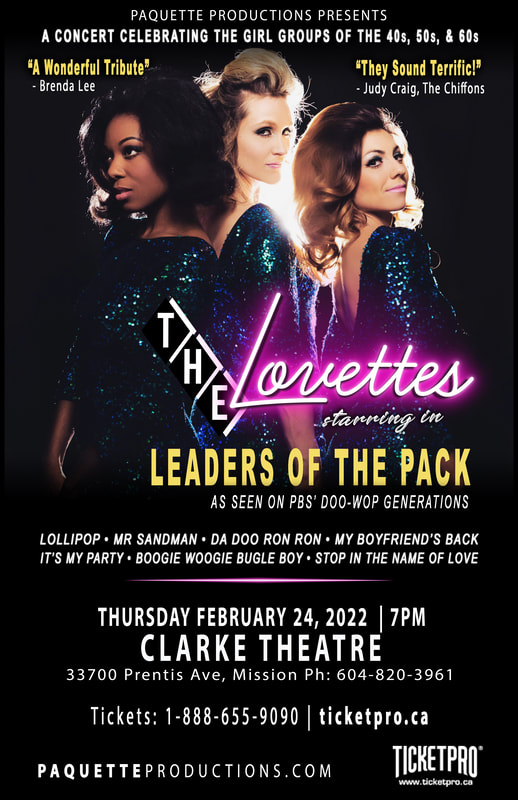 ​Leaders of the Pack

Chicago-based rockers The Lovettes celebrate the great girl groups from the golden era of pop in their own show “Leaders Of The Pack ”as seen on PBS' Doo-Wop Generations. This talented trio's upbeat retrospective of the 40s, 50s, and 60s is jam packed with harmony, dance, and good times. Putting their own twist on icons from The Andrews Sisters to The Supremes, The Lovettes honor the often underestimated power of women who rock. Chart-topping hit songs include “Lollipop,” “Mr Sandman,” “My Boyfriend's Back,” "Da Doo Ron Ron, ""Boogie Woogie Bugle Boy," "Stop in the Name of Love," and more. 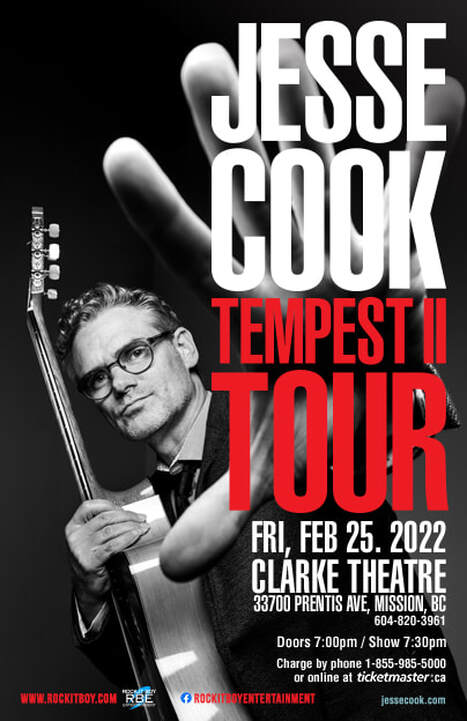 JESSE COOK is an artist that requires no introduction.  He has blazed an incredible trail.
With ten platinum and gold studio albums; five concert DVDs and live discs; five PBS specials;
eleven Juno nominations with one Juno Award for Best Instrumental Album (“Free Fall”, 2001); one Gemini Award; three Canadian Smooth Jazz Awards; one Acoustic Guitar Magazine Player's Choice Silver Award;
a wall full of similar accolades; thousands of concerts in dozens of countries; millions of YouTube views and audio streams; countless fans around the globe; and a career that is celebrating its 25th year and counting.
Not a bad legacy for a guy who never planned to release an album!

Regarding the upcoming TEMPEST II TOUR, it is perhaps best to relate Jesse’s own contemplation of the events of the past year and a half: “Just over a year ago, I was getting ready to begin the Tempest 25 Tour. In honor of the 25th anniversary of “Tempest”, my first CD. I didn’t know it at the time, but there was a larger
and very real storm in our path.

Of course, at this point, the whole world knows what happened next. There was no tour, there were no concerts. And we’ve all lived through a storm like nothing we’ve seen before in our lives. For those of you who had tickets from a year ago, thank you for your patience and understanding, as we have been working hard to find the right time to start again.  We wanted to be sure that when we did return, everyone would be safe.
And finally, today, after much hard work, I am proud to be launching (or is it relaunching?)
the TEMPEST TOUR II, almost 2 years later. 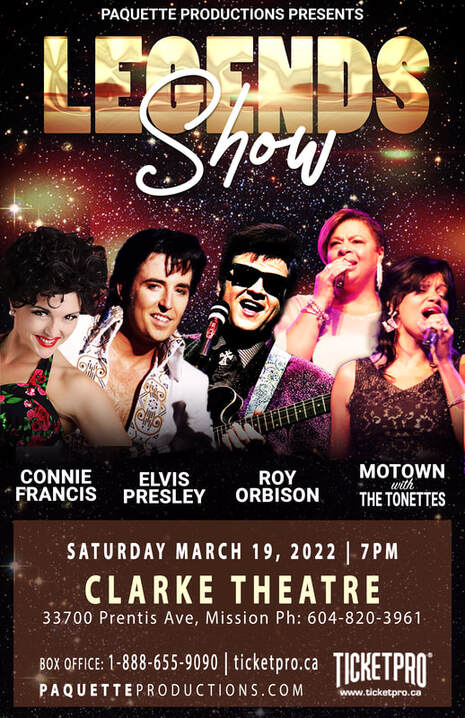 ONE NIGHT ONLY! "Legends Show" brings you some of North America's most exciting performers live on stage. Accompanied by the “Rockin’ Royals Band”, this show will feature the most incredible Tributes to Roy Orbison, Connie Francis, Elvis Presley, and Motown.

Performing as Roy Orbison, Jesse Aron, who hails from the State of Wisconsin, is recognized as one of USA’s top Roy Orbison Tribute performers. With his effortless voice and uncanny resemblance to Roy, Jesse will take you back in time with such hits as ‘Crying’, ‘Pretty Woman’, ‘Only The Lonely’, ‘Running Scared’,
and many more of your favourites.

Canada’s Tribute Queen, Amberley Beatty, returns to the stage with her truly remarkable Tribute to American Pop Singing Icon, Connie Francis. Idolized by millions of fans around the world, Francis is best known for her hits such as ’Where the Boys Are’, ‘Who's Sorry Now’, ‘Your Cheatin’ Heart’, ‘Stupid Cupid’, Lipstick on Your Collar’.

The stars of "Motown Soul", Cathy and Marlene known as The Tonettes, have been blessed with power, sensitivity, and vocal energy. This sensational trio will be performing a variety of songs from the music of Diana Ross and The Supremes, Aretha Franklin and many others. A performance not to be missed.

Pete Paquette is a World-class Elvis Tribute Artist and highly regarded as one of the top Elvis performers in the business today. Known for captivating his audiences through his incredible voice, high energy, charisma, and playful spontaneity with his audiences, this multi-award winning performer will leave you wanting more.


The Longest 50th Anniversary Tour Ever! 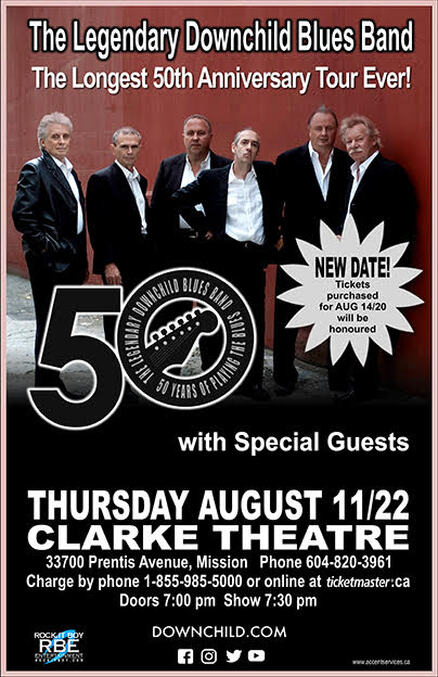 Rock.It Boy Entertainment presents THE LEGENDARY DOWNCHILD BLUES BAND WITH SPECIAL GUESTS
on Thursday, August 11, 2022 at the Clarke Theatre, 33700 Prentis Avenue, Mission.
Tickets are $52.50 (Plus Facility Fee & Service Charges) available at all Ticketmaster locations.
Charge by phone at 1-855-985-5000 or online at www.ticketmaster.ca.

On June 22, 2019 THE LEGENDARY DOWNCHILD BLUES BAND shut down Bloor Street West in Toronto to kick off their 50th Anniversary Tour in Canada, with a blues party for the ages at the TD Toronto Jazz Festival, to over 10,000 fans, who packed the street to catch a glimpse of the world renowned band.

DOWNCHILD had a full slate of tour dates throughout the country this spring for the second half of their 50th Anniversary Tour, that was supposed to culminate with a grand finale show on June 22, 2020. Unfortunately, the pandemic hit, and the band had to postpone all their shows until this fall for the safety of fans and
to follow the direction of Heath Canada.

While they cannot perform LIVE right now, the band felt the next best thing they could do was release a LIVE CD to lift fans spirits in this challenging time and give them a live music concert experience. Fortunately, producer, L. Stu Young recorded their historic show in Toronto last summer and was impressed with results when he
listened back to the performance.

“Live At The Toronto Jazz Festival” is set for release on August 14, 2020 and will be exclusively available to purchase NOW through a special PRE-SALE on the band's website at https://downchild.com/store  The first 100 fans to buy the CD between June 22 – July 3 will receive a personally autographed copy and will get it in advance of the official release date. With the COVID-19 pandemic causing havoc for all touring Canadian musicians, DOWNCHILD will donate $5.00 for every CD sold to the Unison Benevolent Fund in support of their
fellow musicians in these challenging times.

“We are honoured to be able to support a great cause like Unison, that truly takes care of our own, in supporting Canadian artists and Canadian music industry professionals in this difficult time. Like so many people across the country and around the world, the music community has been hit hard by the pandemic."
- Donnie “Mr. Downchild” Walsh

The Unison Benevolent Fund is a non-profit, registered charity that provides counselling and emergency relief services to the Canadian music community. They are there to help professional music-makers in times of hardship, illness, or economic difficulties. For further, information on Unison and they great work they do, please see https://www.unisonfund.ca/about/mission

2018 Juno Award winners, THE LEGENDARY DOWNCHILD BLUES BAND, include some of the most well-respected musicians in the country, who have performed together for over 25 years.  Guitarist, harmonica player, leader and co-founder of the band, DONNIE WALSH, lead singer and harmonica player CHUCK JACKSON, PAT CAREY on tenor sax, MIKE FITZPATRICK on drums, GARY KENDALL on bass, and former American super-group rocker MICHAEL FONFARA (of Rhinoceros/Lou Reed fame) on keyboards. 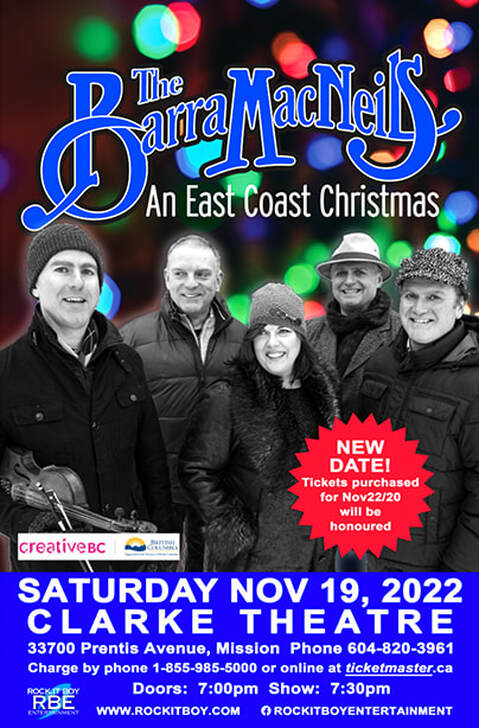 Rock.It Boy Entertainment presents The Barra MacNeils East Coast Christmas on Saturday, November 19, 2022 at the Clarke Theatre, 33700 Prentis Avenue, Mission.  Tickets are $47.50 (Plus Facility Fee & Service Charges) available at all Ticketmaster locations.  Charge by phone at 1-855-985-5000 or online at www.ticketmaster.ca.

One of the most beloved concerts on the seasonal circuit, the Barra MacNeils East Coast Christmas features a highly entertaining mix of traditional seasonal fare along with entertaining stories and new musical twists; stamped with their lush harmonies and intricate instrumental stylings. Their show has been touring nationally, as well as in the U.S, for years to sold-out houses. Fans can look forward to classic favourites including: “O Holy Night”, “Ave Maria”, “Christmas in Killarney” and “Auld Lang Syne” as well as some comedy, seasonal stories, music, singing, dance and memories that will extend beyond the season and last a lifetime.

Canada’s Celtic ambassadors, Cape Breton-based family group the Barra MacNeils are widely regarded as one of the greatest live concert acts in the Celtic world. Their live performance offers a depth of talent that includes multiple lead vocalists, beautiful sibling harmonies, top-drawer instrumental talent on a wide variety of acoustic, stringed, percussion and wind instruments blended with dancing, storytelling, humour and Gaelic songs. It is family entertainment at the highest level.

Steeped in Cape Breton tradition with strong Celtic roots and musical artistry, this diverse and talented family group continues to wow audiences around the world.   They were nominated for PEI`s Fan`s Choice Award for Entertainers of the year (2014).  They continue to perform to sold out audiences throughout Canada, the USA, the Caribbean, and the United Kingdom.

For more about The Barra MacNeils visit: www.barramacneils.com.